The NYC Department of Transportation is inviting all interested parties to view the most recent designs for the captioned project and learn about the progress of the Draft Environmental Impact Statement.

These materials and this information will be on display in the Court House at Historic Richmondtown at 441 Clarke Avenue, 2nd floor.

You can view the displays online at:
http://nyc.gov/html/dot/html/motorist/richmondtown.shtml#richmondtown

You can submit comments via email to:
Richmondtownproject@dot.nyc.gov

Our Monthly Meeting - What You Missed !!!

So what did you miss? You missed an update on various items in our community (New Dorp Lumber, 321 Edison, Hess, Franks, dining, the Welsh property). You missed Ann's Joke of the Month! You missed a presentation by Michael Reiser, the Recycling Outreach Coordinator for Staten Island, who worked through the financials associated with recycling to show how recycling does make financial sense for the city. He helped us understand how much more room there is for us to improve and the benefit there would be for us. And he also answered a number of questions that our attendees had for him.

So if you are now saddened that you missed the meeting - don't despair. We will have another meeting in November on the 15th. Plan now on attending.

And lastly, remember, you can join us for dinner on the 30th. Check out the entry on our Dining Through New Dorp event.

See you around the neighborhood.

We will resume our Dining Through New Dorp program with our 44th visit to a wonderful neighborhood restaurant - Brioso. Plan now on joining us for good food, good conversation and good company. We have purchased over 1250 dinners from our neighborhood restaurants and spent over $30,400 since 1994. It is a program of which you can all be proud.

Our monthly meeting will be Thursday, October 18 at 8pm at the Kells-Grennie American Legion Post at 2750 Amboy Road. Our guest speaker is Mike Reiser, the Recycling Outreach Coordinator for Staten Island. Plan now on attending and bring a neighbor!

The October newsletter... ah yes. I've heard comments that the newsletter sometimes arrives after our monthly meeting. And that is not good. So this month I made sure that it was completed earlier and delivered to the printer earlier. My hope is that yours was in your mailbox. (My newsletter arrived yesterday.) Please let me know if it does not arrive before our monthly meeting next Thursday.

If you cannot attend the meeting but want to become more involved and help us with the work of the Association, please call 718-979-6011 or send us an email at ndcca@excite.com or newdorpcentralcivic@yahoo.com.

Thank you and I hope to see you at the meeting!

I have been told by a number of members of this organization that I should have included some information in the last newsletter which I did not. So let me make up for it now. Congratulations to Marie Markowski, NDCCA Treasurer who became a grandmother for the first time in the last week of August - a baby boy to her oldest daughter… I hope everyone enjoyed the Columbus Day Parade on September 30. The bands were magnificent and the marchers were very enthusiastic. Standing on the sunny side of the street, I even picked up a little sunburn. Thank you to Borough President James Molinaro for bringing this event to our community each year. And a thank you to Deidre D’Angelis, Principal of New Dorp High School, for the use of her facility to stage the marchers and host the Italian Heritage event preceding the parade… There is an enormous structure being constructed at Bache and Edison, a building which is truly out of character with the surrounding housing. Yet despite the zoning changes that were enacted to slow down the growth in our neighborhoods, these ghastly structures are still legal and there is little that we can do to prevent them. As we said years ago – and testified to the NY City Council – our corners are being bought up by community facilities and turned into medical centers due to the increased available parking on the streets… And as we mentioned last month. there is much for us to keep an eye on in our community. There is the former Waldbaum’s /Franks property. Now that it is not going to be a Target… what will become of it? Do we really need another stripmall? There is the developing structure at New Dorp Lane and Edison – the old Welsh property. We are watching as the structures there take shape – two structures... We now have a magnificent park down by the beach. Will we be able to get the commitment from the Federal government to keep the waterfront clean and usable or will we need to tiptoe carefully through garbage and other junk on the beach? And what can we do to support the second phase of the New Dorp Beach project that will create the bikepath linking Midland and Great Kills Parks? And speaking of the new park, did you get a chance to experience it this summer? If not, its still there. Go check it out!... Want to get more involved with your community and our organization? You can make a difference. There are a number of other ways you can contribute by joining or chairing a committee. Call 718-979-6011 and let us know that you are interested. Call today!... A special thanks to Barbara Sanchez – our Webmaster – who has helped us get the blog up and working. We would not be where we are without her. Thanks again!!... Interested in running for public office, the League of Women Voters will sponsor six sessions at CSI beginning Oct16. For additional information call 212-725-3541… and lastly, congratulation to NDCCA members Alex and Candida Finkelstein who recently celebrated their 70th wedding anniversary. Yep… 70!!!... Wow… congrats!
Posted by NDCCA at 8:08 PM 2 comments:

As I look out my window at the first rainfall we've had in a number of days I think back on the comments I heard last night by Melissa and Patricia. They live on Roma Ave and they were telling us about the water problems they have suffered and endured for many, many years. Unfortunately they did not hear about any quick fixes that will alleviate their problems in the near future.

What we did hear last night at a Community Board 2 meeting were the beginning details on a project which will bring new water mains as well as sanitary and storm sewers to a number of streets in the New Dorp Beach Community - Cedar Grove Avenue, Milton, Finley, Hett and Roma, as well as a number of the streets running down to Cedar Grove Ave, such as Marine Way. Some streets will get all three - new water, new sanitary and storm. Other streets will get less. Many of those decisions will depend on the age of the current structures and the width of the streets.

The project is fully funded... so it will happen. Final details of the project will not be available for about two more years. Hopefully soon after that our New Dorp Beach neighbors will be able to begin getting relief and improved services for much of that neighborhood.

> Joe Markowski
Posted by NDCCA at 8:37 AM No comments:

Well we have finally found out what will be going into the former New Dorp Lumber main building. A local real estate company is advertising "Prime Retail Space For Lease". They describe the offering as "New Dorp Strip Mall (New)... 7 Upscale Storefronts at Train Station, 1000 to 4000 Sq.Ft. at $25/Sq.Ft." I hope the location brings some interesting new businesses to our community. We shall see.

As for the other New Dorp Lumber property, it is becoming three houses despite what the builder may have told local neighbors. (I heard that he told them two.)

> Joe Markowski
Posted by NDCCA at 8:17 PM No comments:

Help Plant Trees in the Greenbelt!

In celebration of It’s My Park Day, park staff will plant thousands of saplings on the grounds of the new Greenbelt Recreation Center, 501 Brielle Avenue, S.I., NY to restore the trail that connects it to the Nature Center and the Great Swamp. The site is easy to reach via public transportation or car.

Volunteers are needed all day for this environmental restoration project. Two planting sessions: 9 - 11 a.m. & 1 - 3 p.m. Volunteers, please contact the Greenbelt at: 718-667-2165 or communications@sigreenbelt.org

Earn conservation and/or community service hours (if applicable). Tools, gloves and refreshments will be available. Tree-planting experience is not necessary, but a love of the outdoors is helpful! Visit: sigreenbelt.org for more details.

Councilman Oddo will be pulling together a group this Thursday to look at the growth of graffiti throughout our neighborhoods. As I walked up the Lane on Sunday I could see more graffiti than I would have liked. (I would have liked none.) Crazily, much of the graffiti is on the second story level meaning that some people (vandals) are climbing atop our commercial buildings so they can leave their tag. That is both ugly plus dangerous.

Hopefully this group will come out of the meeting with some action steps that we can take to stem this ugly tide.

What are your suggestions for fighting graffiti? 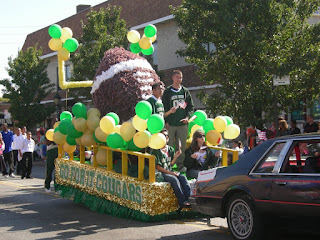 We celebrated the Columbus Day Parade this Sunday and it was a marvelous event on a wonderful weather day. Sponsored by our Borough President James Molinaro, this was the 17th Annual march up New Dorp Lane. There were marchers and floats and bands galore entertaining the many citizens of Staten Island and New Dorp who lined the streets to enjoy this spectacle. Yes, the high school bands were there, various sco 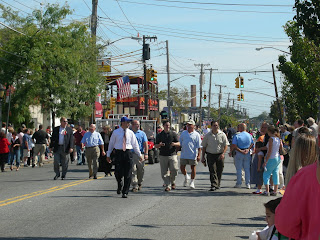 ut troops, our own New Dorp High School float, various Italian organizations, the SI Zoo, and Mrs.Rosemary's dancers. Many restaurants along the Lane sold food to the hungry spectators (and marchers). A good time was had by all. Me? I stood on the sunny side of the street and actually picked up a little sunburn as I enjoyed the festive display. I hope you managed to enjoy this treat for our community.
> Joe Markowski
Posted by NDCCA at 12:19 AM 1 comment:

Established in 1976, the New Dorp Central Civic Association (NDCCA) focuses on protecting, improving and enhancing the quality of life of those people who live and work in the community of New Dorp. For more info about NDCCA, visit our website at NDCCA.com